Our mission is to increase the learning opportunities and
​enhance the academic achievement of students experiencing homelessness and housing instability.
Our services
To advance our vision and achieve our mission, Community Education Partnerships raises awareness about the experiences of youth facing homelessness and housing insecurity, and offers them:
Values Statement
CEP is a response to the inequitable, but predictable, distribution of housing and educational opportunities. Without large-scale structural and economic reparations and the redistribution of resources from the few to the many, far too many families and children will continue to struggle to secure safe and suitable housing and access high-quality educational opportunities. Despite the individuals and organizations doing the difficult and critical work of helping families access and maintain safe, affordable, and suitable housing and who work tirelessly towards educational equity, there remain thousands of children in California facing homelessness and housing insecurity and who, by and large, attend the lowest performing schools and have the fewest opportunities to thrive academically. These are our students. We may not be able to house them, we may not be able to change the schooling they receive, and we have little control over the opportunities or lack thereof that greet them upon graduation, but we can support their learning and we can champion them. We can participate in the development of their intellectual curiosity, we can support them as they learn to read, we can help them build a strong foundation of knowledge and academic skills, and we can contribute to their enjoyment of learning. We can, and we will, tell them with our words and through our actions that they matter and that we care about them.
As we approach our work, we acknowledge that: Our philosophy of service is based on:
Who we serve
Community Education Partnerships serves youths experiencing homelessness and housing insecurity. Our definition of homeless is based on that of the McKinney-Vento Homeless Education Assistance Act. Homeless youth include:
History
In 2008, CEP Founder, Erica Mohan, began volunteering with School on Wheels, an organization that has been tutoring children who are experiencing homelessness and housing insecurity in the Greater Los Angeles Area since 1993. In Spring of 2010, Erica began working full time for School on Wheels in their Downtown Learning Center. Understanding the critical need to academically support children who are experiencing housing insecurity and realizing that the Bay Area lacked an organization specifically dedicated to providing such support, Erica founded Community Education Partnerships. CEP volunteers began providing mentoring and tutoring to youths experiencing homelessness and housing insecurity in Oakland and Berkeley in 2011. Since then, it has grown steadily and now serves students in San Francisco, Oakland, Berkeley, San Leandro, Richmond, and Alameda.

About Homelessness and Housing Insecurity

About Homelessness and HOUSING INsecurity
Reliable and accurate statistics regarding the homeless population are hard to come by. This, in part, has to do with problems of definition. Who exactly is considered homeless and who is counted by the homeless census? Moreover, many statistics capture a single point in time and, therefore, do not include all those who experience homelessness in a given year. This issue is compounded by the fact that many homeless individuals and families are highly transient. Nevertheless, although they vary somewhat between different reports and publications, the numbers all point to an alarmingly large homeless population in the United States. The National Center on Family Homelessness (2014) found that “Based on a calculation using the most recent U.S. Department of Education’s count of homeless children in U.S. public schools and on 2013 U.S. Census data:From 2012 to 2013, the number of children experiencing homelessness annually in the U.S.:
A SNAPSHOT OF HOMELESSNESS and housing insecurity IN CALIFORNIA
​With over 37 million residents, California is the most populous state in the country. California also has the largest population of homeless students in the country and twice the rate of homeless students as the national average (2014, California Homeless Youth Project). In fact, “in 2009, nearly a third of all homeless students nationwide lived in California, according to the federal Department of Education” (2011, California Watch). America’s Youngest Outcasts: A Report Card on Child Homelessness (2014) assigns each state a ranking of 1 (best) to 50 (worst) based on a state composite score that reflects each state’s overall performance across four domains:These are summed to compute the state’s composite score to produce the overall state rank of 1 to 50
California received a ranking of 48, as described in the report card below. From: America’s Youngest Outcasts: A Report Card on Child Homelessness. (2014). Waltham, MA: The National Center on Family Homelessness at American Institutes for Research.

The academic REPERCUSSIONS of homelessness and housing insecurity
“America’s Youngest Outcasts ” states that “The impact of homelessness on the children, especially young children, is devastating and may lead to changes in brain architecture that can interfere with learning, emotional self-regulation, cognitive skills, and social relationships.”

According to the Institute for Children, Poverty, and Homelessness, homeless youth are significantly less likely than their peers to be proficient in math and reading in elementary school. Research shows that these gaps in reading and math achievement are not made up over time, and only continue to grow through high school (Voight et al., 2012). How ever persistent these achievement gaps between homeless and highly mobile students and their more economically advantaged peers  may be,  Hebers et al. (2012) found that “ For families living in extreme poverty with high risk for homelessness and residential instability, a strong start in the early school years may have a particular significance as a protective factor for child achievement ” (p. 367). 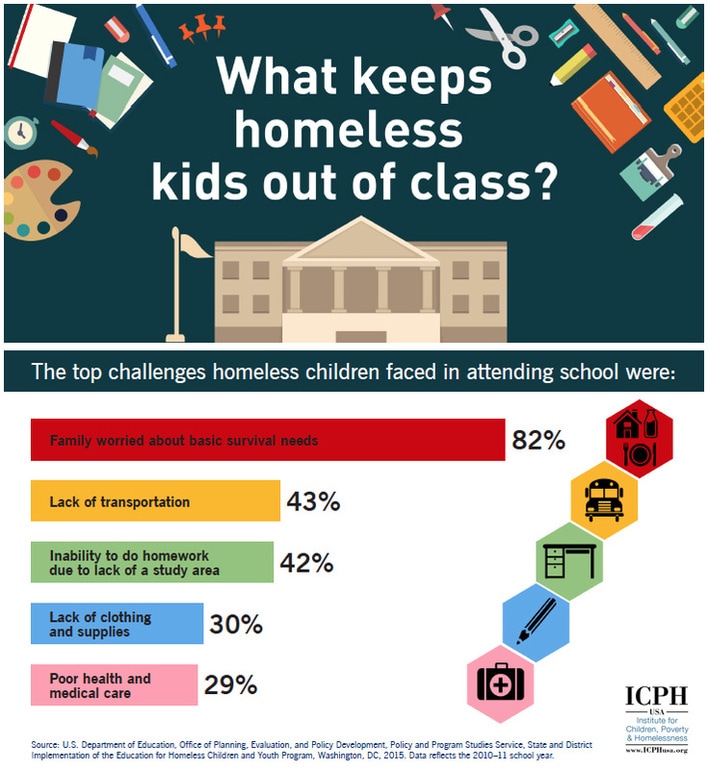 Additional Resources
National Association for the Education of Homeless Children and Youth: Available at: http://www.naehcy.org/

Institute of Children, Poverty, and Homelessness: Available at: http://www.icphusa.org/

National Coalition for the Homeless. Available at: http://www.nationalhomeless.org

National Law Center on Homelessness and Poverty. Available at: http://nlchp.org

The U.S. Conference of Mayors’ Report on Hunger and Homelessness. (2016). Available at: https://endhomelessness.org/wp-content/uploads/2017/02/US-Conference-of-Mayors-Report-on-Homelessness-and-Hunger_Final.pdf